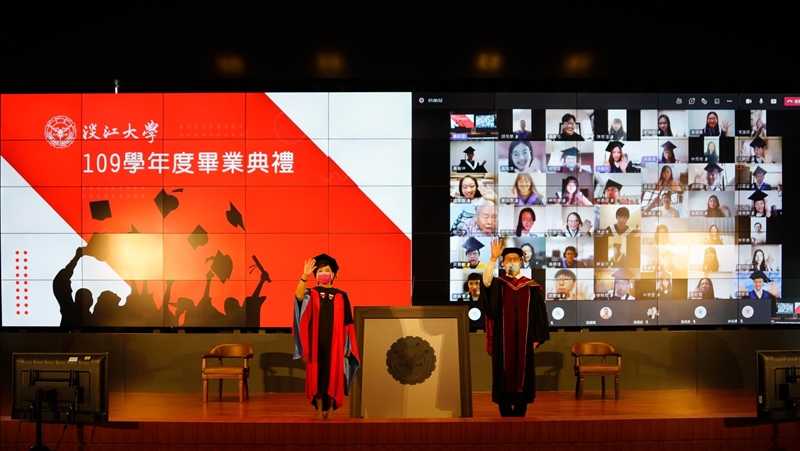 Congratulations to the 6,300 graduates from Tamkang! Affected by the pandemic this year, the country has entered the third level of pandemic prevention alert. The university held the most special 2021 academic year commencement ceremony online at 10 AM on June 12. The ceremony took place at HC310 of the Hsu Shou-Chlien International Conference Center and was presided over by President Dr. Huan-Chao Keh and Chairman Dr. Flora Chia-I Chang. The President of the Alumni Association Headquarters Dr. Lawrence Jian-Xiang Lin also used pre-recorded speech to encourage and congratulate students. All graduates and certified representatives participated in the whole process without environmental restrictions and completed the online tassel turning ceremony. More than 1,600 people participated through MS Teams and watched the live stream on YouTube, showing that our university used information technology to create an unforgettable commencement ceremony for the students when it was impossible to host a physical one.

President Keh congratulated all graduates who have achieved success in Five Tiger Hill and are about to move towards a bright future. The theme of this year's graduation ceremony is "AI of Tamkang Spreads Wings Towards Internationalization, Enterprises’ Favorite and Sustainable Future," which covers three important meanings: first, the university has long promoted internationalization, information-oriented education, and future-oriented education with outstanding performance; second, is to integrate the three educational concepts into various courses, so that graduates have the eight basic qualities of Tamkang, which became enterprises’ favorite; third, enterprises now attach great importance to digital transformation and sustainable development, so AI and sustainability are what students need the most. The future society will face rapid changes, so we must keep up the pace with the times and change ourselves quickly to adapt to society. Tamkang encourages all graduates to develop lifelong learning, self-directed learning, and cross-field learning capabilities in addition to the general literacies of AI and sustainability.

Chairman Dr. Chia-I Chang mentioned in her speech, everyone walked through the 132-steps from the Slop of Overcoming Difficulty in 2017 and entered Tamkang to study. After four years of hard work, they have obtained the three rings of courses, five educations, and eight basic qualities. She explained that the World Economic Forum’s “2021 Global Risk Report,” estimated that 97 million new jobs will be created in 2025. Therefore, the future requires the ability to work in innovation and cross-domain integration such as big data, cloud, and artificial intelligence. In addition, leadership, communication, and interpersonal team spirits are important to work attitudes. She even followed President Lincoln’s motto, "The best way to predict the future is to create the future," hoping that all graduates will possess international perspectives, have the ability to utilize information, and be able to create their future.

The President of the Alumni Association Headquarters and Chairman of Grand Dynasty Industrial Co., Ltd. Dr. Lawrence Jian-Xiang Lin, encouraged graduates to live out their own life. He emphasized that success may not be accomplished alone, but only with the support of parents, teachers, relatives, and friends. He hopes that graduates will maintain the "People-Oriented" belief and be true to themselves. If one encounter obstacles, remember that her alma mater and the entire alumni association will be the strongest backup

During the Valedictorian Address, the speech representative from the Department of Japanese Ting-An Su shared that although her university experience was very rich, there are still many things that she wasn’t able to complete. No matter what one decides to do, there will always be regrets, thus, one should just make decisions with no regrets. "Challenge yourself and never give up. " Encouraging graduating classmates to never forget themselves on the path of pursuing excellence and becoming influential, always believe in themselves, and live out self-confidence.

As the "Commencement Ceremony" clip was played, leading everyone to review their times in Tamkang, graduates chanted "I love Tamkang" during the pre-recorded video, which was touching and moving. At the end of the ceremony, graduates were invited to sing the alma mater song again filled with the Tamkang spirit. Then, the list of all recent graduates was shown, marking a successful conclusion to everyone's study at Tamkang University. 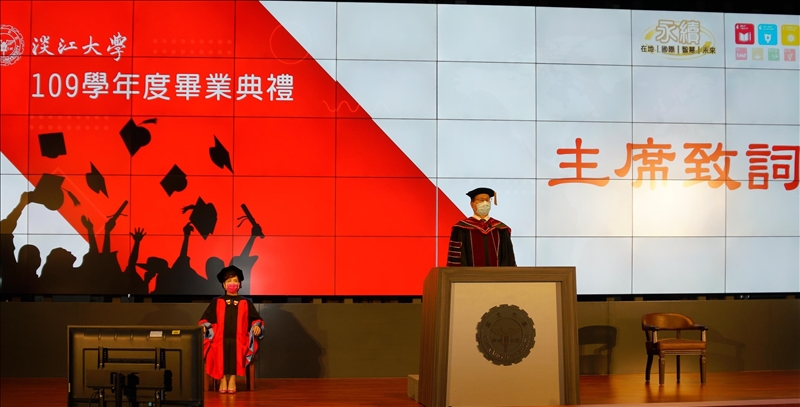 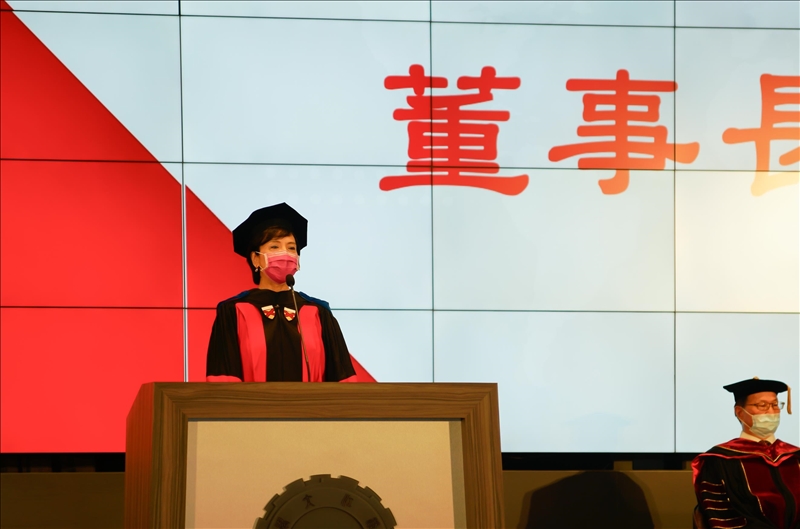 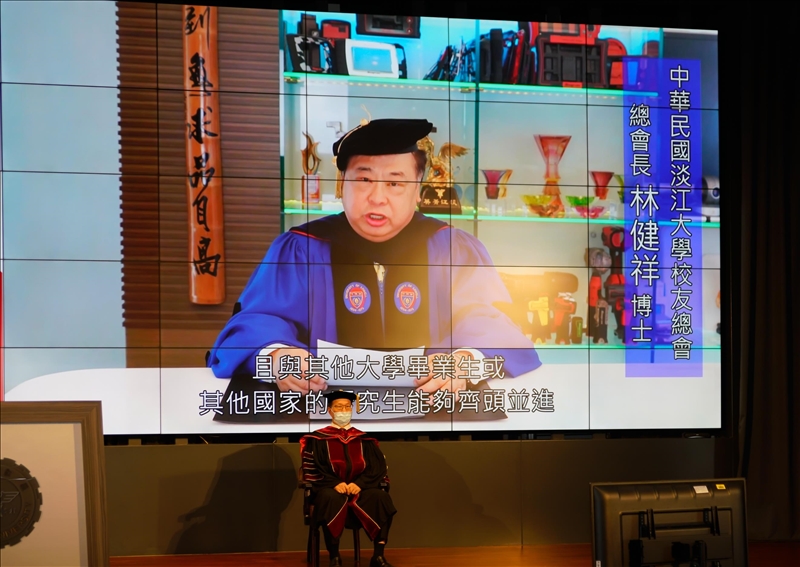 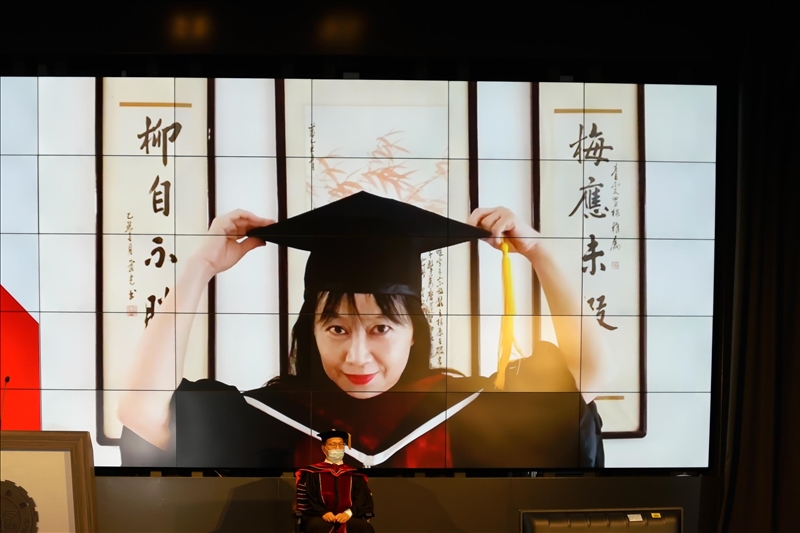 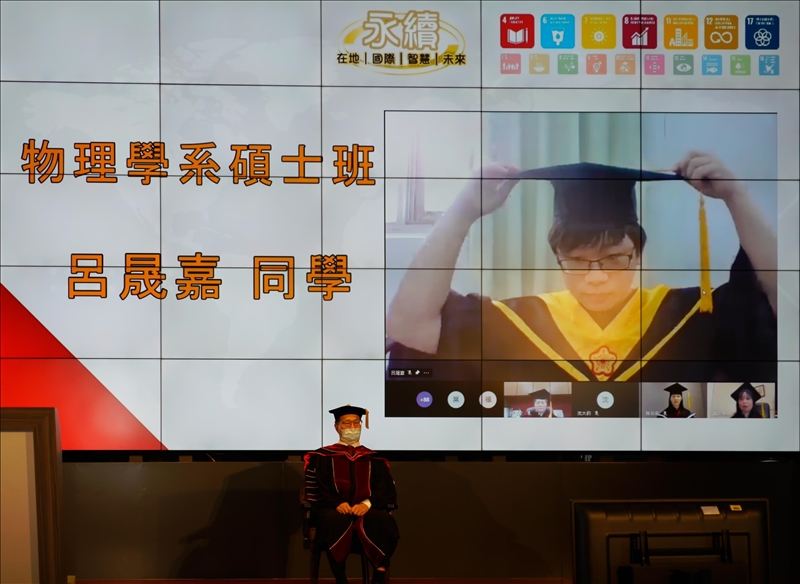 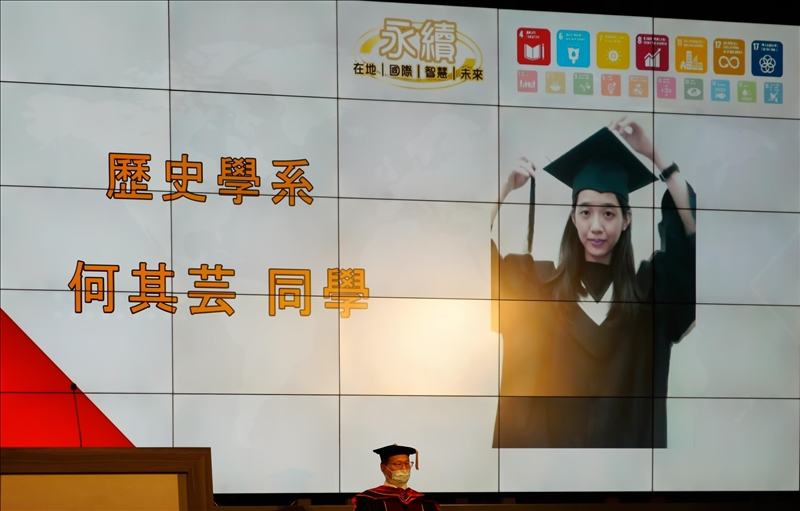