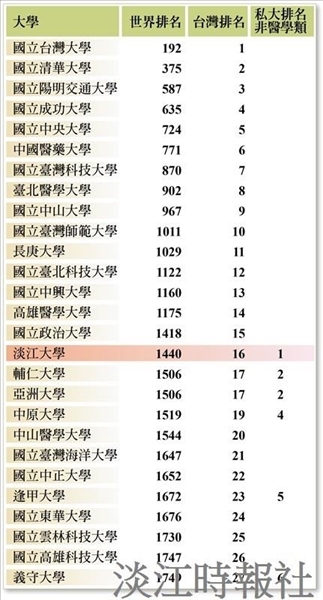 U.S. News & World Report referred to as "U.S. News" announced the "2022 Best Colleges Rankings" on October 26th with a total of 1,750 universities worldwide on the list. 27 universities in Taiwan made the list, Tamkang University ranked No. 1440 worldwide, No. 456 in the Asia region, and No. 16 Nationwide. In comparison with the previous year, the rankings have improved. The global ranking has improved 15 places from last year’s 1455, and the Asia regional rankings have improved by 8 places. Taiwan's ranking has improved 3 places from 19th to 16th. Except for medical universities, Tamkang is the only private university that has improved its ranking and ranked No. 1 amongst private universities in the country. At the same time, in the subject rankings, the university's chemistry and engineering major leaped to 830 and 859 respectively.

U.S. News acts as one of the authoritative ranking institutions, it evaluates global universities based on 13 different indicators including global academic reputation, regional academic reputation, teacher publications, international cooperation, and the number of paper citations. It also conducts subject rankings and provides references for students worldwide with overseas admissions.