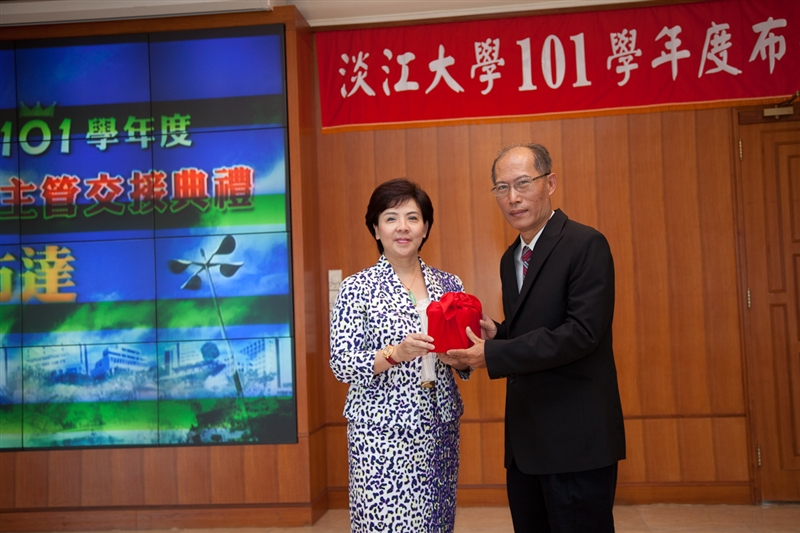 At 10am on Wednesday, August 1, the Chueh Sheng International Conference Hall, Tamsui Campus, was home to the 2012 Faculty Farewell and Welcome Ceremony. The ceremony oversaw the handover between new and old, with a total of 26 new deans and department chairs to take up posts in TKU institutions such as the College of Business and Management, the Carrie Chang Fine Arts Center, the College of Education, the Division of Continuing Education, the Office of General Affairs, the Office of Finance, and the TKU Memorial Library.

At the beginning of the ceremony, Tamkang University president, Dr. Flora Chia-I Chang, delivered an opening speech, in which she outlined six primary objectives for the 2012-2013 academic year. The first objective involves integrating the TKU College of Business and College of Management. The two colleges have now merged into a single entity known as the TKU College of Business and Management. Combining the two college’s resources, the new College of Business and Management contains numerous departments, close to 12,000 students, and a plan to amalgamate and enhance the level of instruction, research, administration, and student counseling. The aim for the college is to successfully obtain AACSB accreditation.

Other objectives include developing the level of on-campus information and technology services, expanding the scope of the TKU Publishing Center, more closely defining the role of each college in developing student’s moral and social character, offering honorary credit programs to achieve the Three Circles and Five Disciplines of Education, and the implementation of a new system in which assistant professors are required to achieve promotion within eight years of service.

President Chang also talked about her recent trip to Nanjing, China, to attend a conference for university presidents from Taiwan, Mainland China, Hong Kong, and Macau. She described some of the topics broached and academic agreements signed during the conference, as well as current trends in the Mainland Chinese system of higher education.