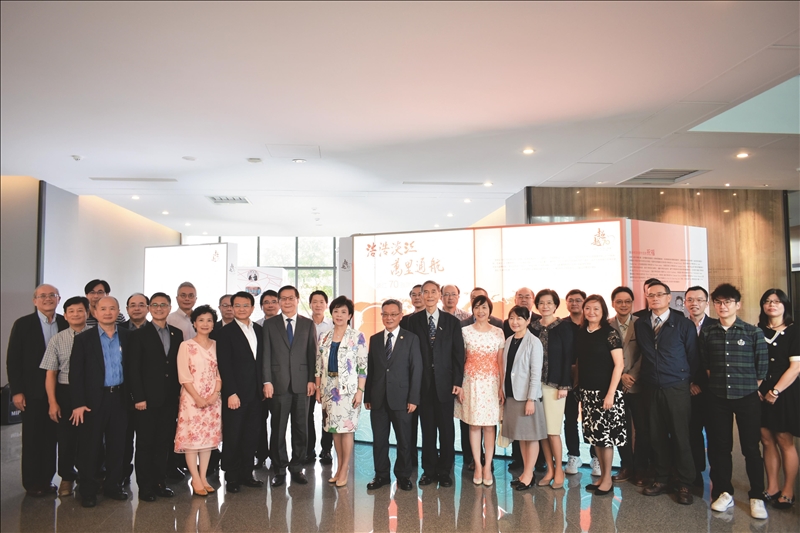 The opening ceremony of the "Great Distances of Unimpeded Navigation -Tamkang 70th Internationalization Achievement Exhibition" was held on November 2nd at 11 AM on the 2nd floor of Hsu Shou-Chlien International Conference Center. The President Dr. Huan-Chao Keh, Chairperson Dr. Flora Chia-I Chang, Vice President for Academic Affairs Dr. Chii-Dong Ho, Vice President for Administrative Affairs Dr. Shi-Feng Chuang, the first and second level supervisors, faculties, students, nearly hundreds of people participated. The content presents the history and achievements of Tamkang University starting from 6 international partnered universities and institutions in 1950 to the 232 universities throughout 38 countries and across 5 continents around the world now, as well as 38 dual degrees being offered. Simultaneously broadcast blessing videos from 17 international partnered universities and institutions presidents and 15 international partnered universities students from locations throughout the world.

The Chief Audit Executive Dr. Der-Wen Chang stated, "Through this exhibition, we understand that the university has accumulated productive results in international exchanges and these are the results of the hard works of the predecessors. Under the United Nations sustainable development goal of "Achieving Goals and Partnerships," one of the key points of our Tamkang’s continuous promotion is to be ranked third in the world in terms of university influence. Our partnered university, the University of Western Sydney, Australia, can be our study object." Qi-Zhi Cheng, an alumnus of the Department of Transportation Management from Malaysia, believes, "Through this exhibition, I have a better understanding of how Malaysia and Tamkang established partnered relations and the status of the academic exchanges with Malaysia.”